A downloadable game for Windows and macOS

Millions of Minions is a DIFFICULT dungeon crawler, in which you must strategically command your undead creatures throughout the eerie caverns.

The game is in active development at the time of writing, we are hoping to release the game midway through 2020, we will have more info on this shortly.

Increase your army's size through defeating your opponents and eradicating rooms of their presence.

From The Deep Depths, to the Mines, you will encounter a multitude of monsters; both familiar and never-before-seen. Unless you've seen walking lips before?

Make your way through a randomly generated dungeon and find that exit! The portal will transport you upwards until you eventually reach the surface.

Well done guys! Just played it for a bit and I am enjoying what I’ve played so far. Although I’d like to think I know video games pretty well, I haven’t played many dungeon crawlers so you might want to take what I have to say with a grain of salt. I have a fair share of praises but also a lot of critiques and bugs. That’s not to say it isn’t great, but I was trying to “break” the game and play devil’s advocate so you can make an even better end product. So here it goes!

That’s what I got! I hope I didn’t sound harsh, I just want the game to be as good as possible. I’d be happy to play future versions and give more feedback. Best of luck, and Happy Holidays!

The 0.2 demo is interesting.  Over all I think it is a promising concept with high potential.

-It may be good to add a system that will populate the rooms with enemies based on how many minions the player already has. More then once I found myself entering a first room and fighting 4 monsters including 2 lips monsters with only 3 minions. Not the funnest thing ever.

-I don't know if you already have this, but in your random room generation it may be good to have the portal appear in a location that has the player feeling like they had to fight to find it, but not so far that if they want to stay on the level they don't feel like they have to backtrack for half an hour. (not that there is any incentive to stay on a level in the current build. )

-I recommend making the cool-down for the melee attack something you can see right next to the player or more visibly on the cursor, ideally not a UI element but rather a part of the game. (no one is looking at the corner of the screen to see how much longer they have with a cool-down that is 1 second long.)

-When populating a room once or twice I found monsters spawning close enough to me that they dealt damage almost instantly. Perhaps a delay in time before damage can be done, or smart spawning that will force monsters to spawn a safe distance away from the player.

-Passing through the portal feels like no progress has been made except for the words that say I'm in "Dungeon 2" I would much rather have something in game, like the environment, demonstrating how far I am and changing with each level. (but maybe it does change more and I just suck to much to get that far, but you still want people to see progress right from the start.)

- have the minions already spawned in the room and you have to stand close to them or pass over them to get them to fallow you, this could add the the story as well as have it make more sense then them popping out of the air when a room is cleared.

-click and drag minion positions? For when you have lots of them and you want to make a wall.

-monster re-spawning in rooms you have already been in? Maybe have vents or tunnels that suggest they could have come from there.

-buttons or other things that the player can send their minions to activate, opening doors or springing traps.

Like I said, there is a lot of potential in this concept. Sorry for making this 5 miles long, but hey, you said you wanted feedback. :)

Thank you for this Artindi! It's worth noting that this part of the game would be mid-way through gameplay. Hence why the rooms have up to 4 monsters. Stronger minions are planned as well.

We'll see what we can do: I'll pass it on to the one working on the procedural generation.

Easy fix! We'll make sure that's added in the next build (although it may not be publicly available).

Yeah, we have other plans for how minions will be spawned: really excited to see if people will enjoy the different way, actually. Thanks for the suggestion: just goes to show how much people dislike the current spawning system!

Intuitive controls will be a definite addition to the game.

Maybe a build up to them attacking would be smart? Thanks!

Oooh, that'd be interesting! I could see that being terrifying haha!

Puzzle-y elements aren't planned because we want the game to be action packed, thanks though!

Preset formations would be a good idea.

No worries! Any help is greatly appreciated, it shows you do care. Thanks for all of this feedback. We'll see what we can do with it! You've been exceptional with feedback, so not a problem! :D

Awesome idea for a game. I love the idea of getting minions as the game progresses and the music was rather fitting and ominous.

The hits could be a little clearer though - I found myself questioning whether or not I hit the enemy at all(or vise versa). Unfortunately, there was a generation bug that I encountered, and reported via the bug report button(great addition by the way), but I can definitely see this game becoming a lot of fun, can't wait to see more!

Thank you! I'm glad you enjoyed that aspect. Special thanks to our musician haha!

How do you mean? Was the red flash not obvious?

Yeah, just noticed that (thank you!); that 'solid orange' is a blocked off room. Going to see if we can sort that out -- thanks for helping out.

Also, thanks for taking the time to comment, and thanks for being constructive! Thanks for the kind words as well! :D

Hmm, I think if you were to add a more impactful sound, or maybe give some extra audio cues on when you get hit, it'd be much more clearer. Just my thoughts on the issue, might want to see if anyone else mentions it.

Edit: Maybe you can mess with the cursor? Break the cursor in half for a few frames to indicate invulnerability after you get hit. I find myself looking at the cursor more than the player at any given time.

Oh, so you mean whenever the player gets hit?

If so, we definitely agree, and will be working towards those suggestions.

Thanks for this helpful feedback: it means a lot and we hope we can supply you with a fun experience in the future!

P.S: The plans are to release some fixes to the game from now until mid-January until we move onto private testing. (Another test phase will begin at some point in the future).

Very fun. Especially intense when you get really far and desperately avoid as much as you can.

I think there should be graphics settings, maybe just as simple as disabling some lighting effects (I have a pretty janky computer so the FPS wasn't great for me).

Good job on this! Maybe this stuff is already fixed in v0.2, but thought I'd still tell you.

Hey Stoozey! Thanks for taking the time for playing the very early build of the game. Please note that it was made in just under 3 days!

We believe we've made the frames a lot better in 0.2: there currently isn't a need for graphic settings now. (This could change of course).

The issues you stated have been fixed. The camera movement, for example, is a lot cleaner. And the minions shouldn't get stuck in walls.

Thanks again for taking the time to play the very early build of the game. We hope you enjoy tomorrow's update where it should be a lot more refined than this build... "should be". 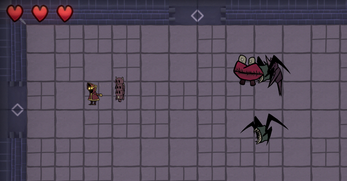 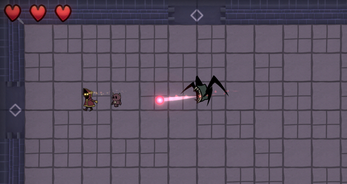 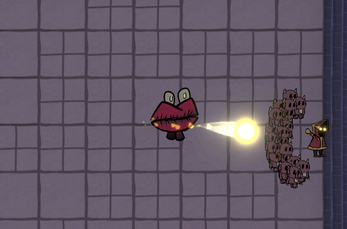